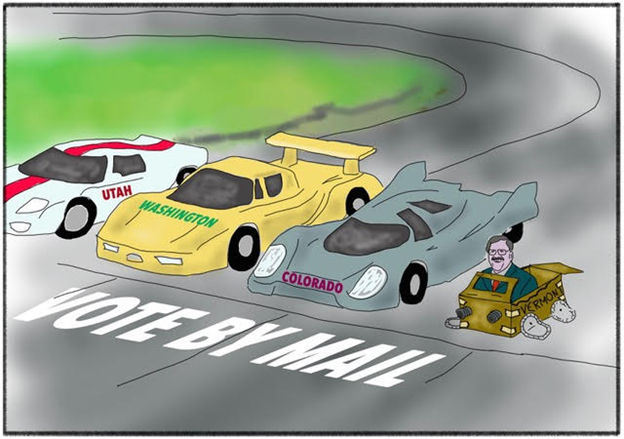 September 29, 2020 - Many of us love going to the polls on Election Day. Joining in-person with our friends, family, and neighbors to participate in the civic process is something I look forward to every election year.

As Vermont’s Chief Election Official, it is my responsibility to ensure we can all safely exercise our sacred right to vote.

My office’s planning for the 2020 elections during COVID-19 has been driven by two unwavering goals: preserving every Vermont voter’s right to vote, and protecting the health and safety of voters, Town Clerks and election workers.

This is why, right now, we are mailing a ballot to every active, registered voter. For the August primary, Vermonters responded overwhelmingly setting a new record voter turnout. The majority of those votes were cast by mail.

Voting by mail, early in-person, and in low numbers at the polls on Election Day, was conducted safely and securely.

Relying on the existing absentee ballot request process for the November general election could not have the same result. General Election turnout is typically double that of the primary. Even now, not knowing what course the virus will take in the weeks and months ahead, we cannot take any risks. The consequences of failing to act; high volume turnout at cramped polling locations during cold November weather, or voters electing to stay home, are far too high.

No voter should have to choose between their health and their right to vote. We do have a safe, secure and accessible solution available to us.

To those skeptical of voting by mail, I welcome the skepticism. We should all care deeply about the integrity of our elections. I only ask that people look to the facts and the evidence, and not secondhand anecdotes, baseless claims and rhetoric.

Election integrity and voter fraud: fortunately, voter fraud is exceedingly rare. Still, we have safeguards in place to prevent it, and to detect those rare cases if they happen.

For instance, Vermont has severe criminal penalties for impersonating a voter, or for voting more than once. All early or by-mail ballots must be submitted in the certificate envelope, which must be signed by the voter under the penalties of perjury that they are who they say they are, and that they haven’t voted more than once. Risking potential jail time to try and change an election by one vote isn’t something most people would think is worth it.

When a ballot is received by the Clerk, early by mail or in-person at the polls, that voter is checked off the checklist as having voted. If another ballot is submitted under their name, the Clerk will know, and an investigation can be triggered immediately.

Our election management system allows the Clerks to see if a voter has moved, and their voting history follows them. Again, if they try to vote more than once, the system will know, the Clerks will know, and we will know.

Clerks know their voters – they will notify us of any suspicious activity, which we take incredibly seriously.

The voter checklist: no voter checklist in the country is free from some inaccurate data. Our election management system, and the implementation of automatic voter registration through the Department of Motor Vehicles has significantly improved the quality of data on the voter checklist. In fact, Vermont is considered to have one of the more accurate voter checklists.

As mailed ballots begin to arrive in voters’ mailboxes, inevitably some will have been sent to voters no longer living at the address, who did not update their voter registration information since moving. You may even see friends and neighbors of yours drawing conclusions about these ballots on social media that do not reflect the full picture. Let’s be clear: this is not proof of fraud unless someone votes a ballot that is not their own.

As mentioned above, this is incredibly unlikely, and the maintained record of where that ballot was sent means in the rare case someone commits felony fraud, it can be investigated and prosecuted.

Ballot harvesting: there is much misplaced rhetoric about voters receiving assistance with the return of their voted ballot. In practice, this is often a relative, neighbor, or friend helping a homebound voter get their voted ballot to the Clerk so that their vote can be counted. The boogeyman often brought up is droves of political operatives sweeping into our communities, going door to door to amass piles of ballots. While farfetched, I have ordered that for this year, candidates on the ballot, or their staff members, cannot collect ballots from voters. We have heard the concerns and have responded prohibiting this activity.

The Town and City Clerks are our election superheroes on the ground. They are sworn election officials, who take the conduct of our Vermont elections incredibly seriously. Every ballot that comes in to be counted is received by the Clerk or their sworn in election workers.

Unlike many other states, Vermont is in a unique position to be able to conduct the November election in this safe and secure manner. Our existing vote by mail procedures put us in position to adapt quickly, and our track record of expert elections administration should inspire confidence. After the 2016 general election, Vermont’s election administration was ranked 1st in the country by the MIT Election Data and Science Lab’s Election Performance Index.

The 2020 August Primary showcased the resiliency of Vermont voters and election workers. We should all be proud. However you decide to cast your ballot in the November General Election this year, you should be confident in the safety, security and integrity of the safe voting option you have chosen.

Vermont not ready for mail-in-voting, says Colorado Secretary of State

September 30, 2020 - Live ballots for the Vermont general election are in the mail and on their way to every active voter on the statewide checklist. Since coming up with this vote-by-mail scheme in response to Covid-19, Secretary of State Jim Condos has argued that it will work because other states have been operating vote-by-mail programs for years without any major problems.

True. But the reason these states’ programs work is because they put in place a number of safeguards that are entirely absent Condos’ plan.

Scott Gessler, who served as Secretary of State in Colorado when that state transitioned to a vote-by-mail system, recently submitted a ten page analysis of Condos’ plan for Vermont and found it lacking any meaningful safety and security measures necessary to ensure that election results are valid and free from significant fraud and error. His concluding paragraph reads:

“Vermont is not ready for an all-mail ballot system. It does not have signature verification to ensure election integrity, nor does it have cure procedures that would prevent inadvertent disenfranchisement resulting from voter mistakes. And Vermont does not have accurate mailing addresses for many voters. Because of these problems, the state should not implement an all-mail voting system for the 2020 general election.”

Colorado’s system works, for example, because they have implemented several anti-fraud measures to ensure people can’t collect and cast multiple ballots in other voters’ names. The primary security measure here is signature verification. All voters must have a signature on file with election officials, and that signature must match the one on the returned ballot’s envelope, otherwise the vote is not counted. Vermont doesn’t have this or any other comparable means to ensure ballots are actually being cast by the voters to whom the votes are being attributed.

But, because signature verification is not a foolproof system, and mail-in voting is more likely than in-person voting to result in careless mistakes or confusion leading to spoiled ballots, Colorado requires that election officials notify a voter if there is an issue with their ballot and give them an opportunity to correct the error. Vermont does not have this or any other “cure procedure” either. As such, in the recent August primary election over 6,000 Vermonters (more than 3% of total votes cast) were disenfranchised without their knowledge because of easily correctable mistakes.

A major concern with mail-in voting is “ballot harvesting,” a controversial practice in which activist organizations or political operatives systematically collect ballots from voters and turn them in on their behalf. This can and has led to illegal activity, such as the destruction of ballots, the fraudulent filling out of ballots, and voter intimidation (see the North Carolina 9th District 2018 Congressional race). Colorado protects against ballot harvesting by making it illegal for any person to collect and remit more than ten ballots. Vermont doesn’t have this simple safety measure, and, in fact, a legislative majority actually voted against implementing a number of reasonable ballot harvesting protections.

Gessler notes that in order for a vote-by-mail system to work it requires extremely accurate databases of where people live (and, by default, where they do not live having died or moved away). Again, Vermont does not have this. On the contrary, our voter checklists are notoriously bad and filled with outdated information that is difficult to expunge.

The final catch-all argument Condos makes in defense of his zero-safeguard system is that fraud and error on a significant scale is a myth. There is no need for safety provisions because there is no evidence anybody breaks the rules. Gessler puts the lie to this as well.

Because Vermont does not conduct signature verification, nothing prevents a person from illegally voting a ballot that has been delivered to an incorrect address or delivered to an address where the voter no longer lives…. Unfortunately, it is often impossible to prosecute people who have illegally filled out the voter affidavit, because the affidavit is unlikely to contain any clues as to the perpetrator.

The reason there is no evidence of voter fraud and therefore perpetrators are rarely prosecuted is because the crime, especially under Condos’ un-watchful eye, produces no evidence, and certainly none that could be used to trace and identify a criminal for prosecution. All we have is a system of see no evil, hear no evil, speak no evil.

The truth is we have no idea how extensive vote fraud by absentee ballot is in Vermont, because there are no reliable mechanisms in place at all for detecting it when and if it occurs. This was bad enough before Covid-19, but as we flood the state with hundreds of thousands of unclaimed and unwanted ballots ripe for mischief, this is negligence on an especially grand scale.

- Rob Roper is president of the Ethan Allen Institute.