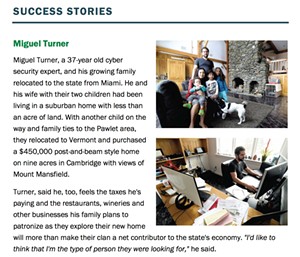 Whoops! The Vermont Agency of Commerce and Community Development apparently lifted without attribution and published on its website a few paragraphs from Vermont’s highest circulation weekly newspaper, Seven Days.

"Commissioner Joan Goldstein, whose Department of Economic Development issued the report, called the situation an "oversight" and "definitely an aberration." She said her department would reissue the report after removing the content in question or securing the rights to use it. Goldstein said use of the material met "the textbook definition" of plagiarism, even if it was unintentional."