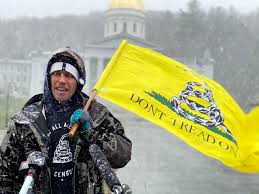 Jim Sexton of Essex Junction invited many people to attend the economic freedom rally at the Vermont State House yesterday, but few attended. Little did he know that the rally and his comments would spur questions about the lockdown, Planned Parenthood funding, and electric car subsidies just a few minutes later at Gov. Scott’s televised press conference.

“ Sexton – who last month respectfully asked the State House police and Sergeant-at-Arms to remove legislators sponsoring potentially gun-confiscatory legislation for violating their oath to uphold the Constitution – was masked, thoughtful, and (as always, for him) focused on individual freedom. “It’s pretty silly that you can’t get your haircut, but you can get an abortion,” Sexton said toward the end of this one-minute, nine second Vermont Daily interview. “It’s pretty silly that you can’t buy grass seed or clothes. It’s pretty silly to threaten people with thousand dollar fines.”"