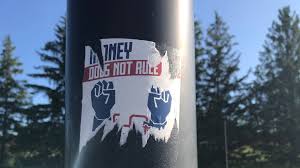 Group leaving posters all over Burlington used to be part of group that planned Charlottesville VA protest. They split after the event that left a leftist protester dead when a rightwing driver struck her with a car.

"Since then, stickers from the Patriot Front appeared around the Green Mountain State multiple times. The group even held a demonstration in Burlington last year, displaying a "Reclaim America" banner in City Hall Park."