Man who held woman for month surrenders to St. Albans police - the Islander 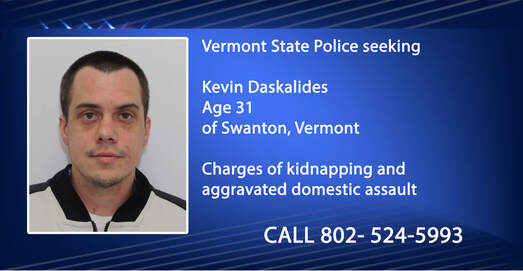 Mike Donoghue doesn’t just ask the most fearless questions at the governor’s press conferences. Vermont’s pre-eminent crime reporter for decades is still at it, including this story about a Swanton man who held a woman against her will for a month.

“UPDATE 5/16/2020: The search for Kevin Daskalides ended Friday when he surrendered at the state police barracks in St. Albans. He was taken to the Northwest State Correctional Facility Center for lack of $100,000 bail. He is due for arraignment on Monday in Vermont Superior Court. State police thanked the public for the assistance while seeking Daskalides.

SWANTON -- Kevin Daskalides, 31, of Swanton is being sought on charges of kidnapping and aggravated domestic assault, according to Vermont State Police. A woman, whose name was not released by police, reported on Thursday afternoon she had been held against her will for more than a month, Trooper Ashley Farmer reported."