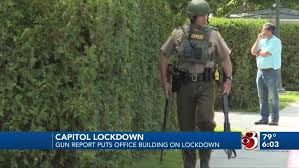 Police not only had to clear each room in the huge 133 State Street building, they had to make sure no gun-toting person had use the underground tunnels connecting 133 State to other buildings in the capitol complex.

“There were two people together that allegedly witnessed someone that they believed had a long gun, going across the street and entering into the tax department,” Facos said. “The information that led to the initial response is that everything appeared to be very credible.”