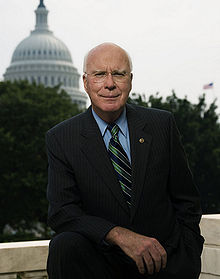 Sen. Patrick Leahy has been serving in Washington so long that he can remember the last time, 34 years ago, when a poll found him running behind a Republican governor whom he later trounced.

"Leahy also told NBC5 that in 1986, another Republican Vermont governor, Richard Snelling, was polling favorably against him as Leahy was seeking re-election at the end of his second Senate term. Leahy won re-election easily."