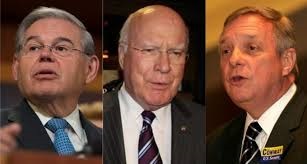 Sen. Patrick Leahy says the impeachment process should begin because President Trump tried to influence the Ukrainian government to investigate a political rival running for president in 2020. Yet that is precisely what Sen. Leahy and two other senators did when they wrote a letter to the chief prosecutor of the Ukraine demanding that he reverse course and cooperate with the Mueller investigation. Pot calling the kettle black?

"Sen. Leahy need only look in the mirror. Last year, Vermont’s senior senator himself attempted to restart a Ukrainian investigation into a 2020 candidate – one Donald J. Trump. He even suggested U.S. aid to Ukraine was hanging in the balance.”