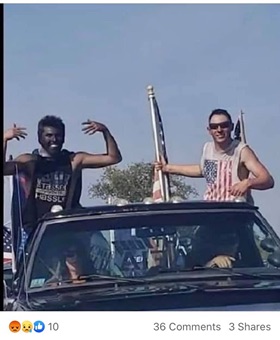 Was that teenager in the pickup truck wearing blackface? Or was he - as he later claimed - just covered with soot from exhaust? WCAX’s coverage of a pro-Trump rally in Newport has some locals wondering about the editorial comment that was there one day, and gone the next.

"After WCAX’s report about the rally went online Saturday, an editor’s note appeared at the bottom of the story. “The editorial leadership here at WCAX News learned Sunday that there was a person at that rally in blackface,” the note read. “We also now know that our reporter saw that person and did not include it in the report. It clearly should have been included and we are sorry that it wasn’t.”"