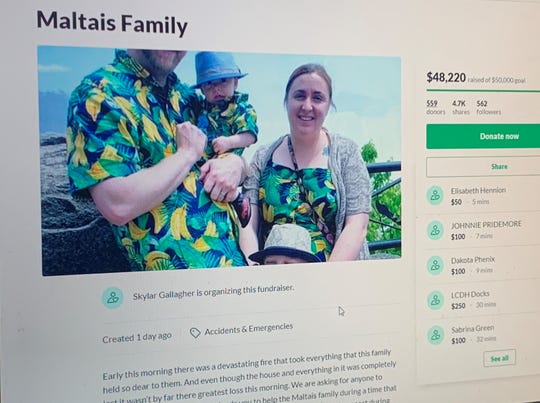 After just a day, a GoFundMe page for a grieving couple has exceeded its original goal. The two young children of first responders Mason and Desiree Maltais died in a fire Saturday morning. Police have confirmed that the two boys who died in a house fire in northwestern Vermont were 5-year-old Theodore Maltais and 11-1/2-month-old Nathaniel Maltais.

"Investigators with the Department of Public Safety Fire & Explosion Investigation Unit believe the fire began due to an issue with the electric clothes dryer and vent system, which had been in use an hour prior to the fire. The cause of the fire was accidental. As of 8 a.m. Tuesday, Skylar Gallagher's GoFundMe for the Maltais family has raised $68,343, well over its original goal of $50,000 and its updated goal of $60,000. 797 people have donated to the fund.