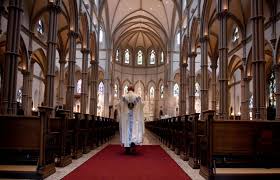 In 2012, a New York priest suspected of child abuse was hired as a nurse manager at the University of Vermont Medical Center.

"Then the Ogdensburg Catholic Diocese in New York released a list in 2018 of former priests credibly accused of sexual misconduct with a minor or vulnerable adult. Larche was on the list. By then, Larche had been working in his new role for six years. A spokesperson for the University of Vermont Medical Center said the facility hired Larche before the accusation was made public.

A USA TODAY Network investigation found that Larche is one of thousands of Catholic officials across the nation who have been named by local dioceses as credibly accused of sexual misconduct but who haven’t been charged with a crime. In many cases, Larche and others moved on to new careers in part because their employers were unable to find out about accusations while backgrounding them during the hiring process, raising potential liability issues once the priests were later named by church officials in the ongoing Catholic Church sex abuse crisis."