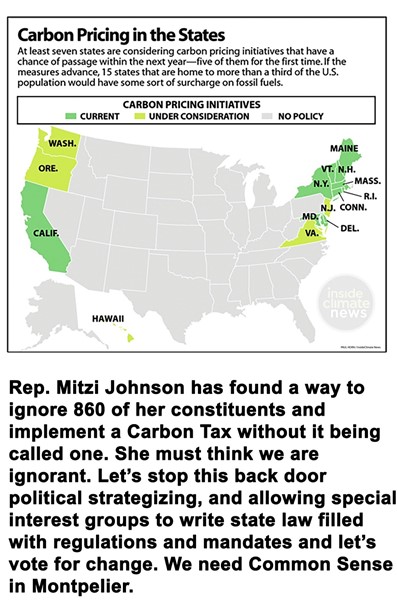 Republicans in Grand Isle County bought a full page ad in the September 23-29 issue of  The Islander, a local community newspaper, accusing local representative and House Speaker Mitzi Johnson of preparing the way for a climate tax – despite a petition in opposition signed by 860 constituents.

The ad appears on page 9 and is entitled “The Global Warming Solutions Act. – GWSA”. Paid for by the Grand Isle County / West Milton Republicans, it urges voters to support GOP challengers Leland Morgan (an incumbent) and Mike Morgan, who are running against Democrat incumbent Johnson and challenger Andy Julow.

“Make no mistake,” the ad continues, “the first recommendation by the 23-member council will be to implement a carbon tax (carbon pricing); disguised as a fee or surcharge because only the Legislature can raise taxes.”

“Ms. Jenn Wood wrote in The Islander last week that Maine, New York, Massachusetts and Connecticut have passed similar laws to the GWSA,” the ad says. It notes that all of these states are pursuing carbon pricing. “Don’t pretend a carbon tax will not be a top recommendation by the Council, because it will! Rep. Mitzi Johnson has found a way to ignore 860 of her constituents and implement a carbon tax without it being called one.”

“She must think we are ignorant,” the ad says. “Let’s stop this back-door political strategizing, and allowing special interest groups to write state law filled with regulations and mandates and let’s vote for change. We need Common Sense in Montpelier.”

During discussion of Vermont’s membership in the multi-state carbon pricing initiative, the Transportation Climate Initiative, there was uncertainty about whether a TCI assessment of 5-18 cents at the gas pump would require legislative approval. Both legislative and executive leaders said that a Vermont-based tax or fee would require legislative approval. However, it was also suggested that other states could unilaterally impose a fee on Vermont consumers by assessing “carbon pollution costs” on regional wholesale fuel dealers of gasoline and on-road diesel fuel.

At his press conference today, Gov. Scott would not comment specifically on the Climate Council imposing carbon pricing, but did say it will have wide, almost unlimited latitude. “That’s why I vetoed it, from a constitutional standpoint,” he said. “A 23-person council that is unaccountable in some respects, they could impose almost anything, from our perspective. I think they have a lot of latitude. The legislature abdicated their power and gave it to this council. They could do almost anything.”

This Global Warming Solutions Act is about building reliance and preventing economic disruption due to weather change that is already happening. The change is already visible to key rural sectors: all agricultural sectors, ski industry and the winter tourism that depends on winter conditions, and water temperature and algae bloom which affects our ecology as well as our summer tourism.

This afternoon, Speaker Johnson responded to a request for a comment with the following:

The bill does not create a carbon tax. The bill does not ban any activities. The council cannot raise taxes, spend money on its own, or pass legislation. Those constitutional powers remain with the legislature. There’s no way around that. Nor should there be.

This is an opportunity to create jobs in weatherization, building trades, sustainable energy and critical solutions. It means we keep more dollars in state helping local businesses. Reducing emissions also means Vermonters save money on heating and transportation costs.

It’s a diverse group representing climate scientists, rural communities, fuel industry, small businesses, environmental groups, transportation, farmers and foresters, manufacturers, youth, low-income Vermonters, towns, and others. Led by the Governor’s cabinet, they will create a plan to reduce greenhouse gas emissions per the Paris Climate Accord, a long-time statutory goal shared by 25 states. At some point the U.S. will rejoin the Paris Climate Agreement. This makes sure that Vermont isn’t left behind.

It narrows, not expands, a right to sue:

Citizens and groups can already sue the state. This bill removes the ability to sue for damages. It allows people to hold their government accountable in the courts. And there is no basis for a lawsuit if the state holds to the basic standards.

“We believe maintaining this commitment and the U.S. leadership on climate change is the right action for the protection of our children, grandchildren and future generations.” remarked Gov Scott when the U.S. parted ways with 187 countries and pulled out of the Paris Climate Accord. But he has not taken action. Vermont is the only regional state with increasing emissions. We must act.   We need leaders who understand climate science, realize the local impact of global warming, and are committed to implementing solutions that work for our communities and for our future