‘Dark money’ has helped Bernie from the start – Daily Caller/TNR

It’s not just $27 checks from The Folks who have fueled Bernie Sanders’ outstanding fundraising efforts. Some big checks have been signed by people whose identities are still unknown. 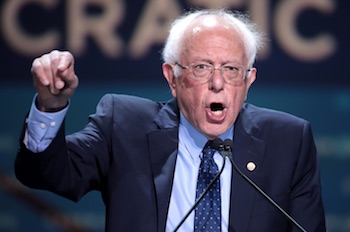 "Sanders founded Our Revolution, a 501(c)(4) nonprofit group that can accept unlimited contributions without disclosing the identities of its donors, in 2016, and one campaign finance expert believes the group’s work to help Sanders achieve his presidential aspirations could be violating the law. “Any entity established by a federal officeholder can only raise and spend money under federal contribution limits for any activities in connection with a federal election,” Paul S. Ryan, a campaign finance expert with the watchdog group Common Cause, told the Associated Press. “Our Revolution was undoubtedly established by Sen. Sanders, is subject to these laws — and is seemingly in violation of them.”